“Dolls in G-strings, tween idols singing about S&M, children posing in mini-skirts and make-up. What messages are we sending our girls and, asks, Sian Briggs, what can we do about it?”

Sex sells and little girls are not immune. Padded bras and matching G-strings may be totally wrong for seven-year-olds, but retailers, manufactures, advertisers, publishers and broadcasters don’t give a hoot. After all, the tween market, aged between six and 12, is big business – worth about $10 billion per year in Australia alone. In the US, it’s worth about $50 billion.

With such big bucks up for grabs, it’s no wonder designers such as Sophie Morin added a line of Victoria’s Secret-style underwear for tweens to her label Jours Apres Lunes – two piece lingerie sets that are frilly, delicate, embellished with lace and bows and as exquisite as they are disturbing. (Morin said she was “extremely surprised” by the uproar the line created in her native France, claiming, “All I wanted to do was offer underwear that is soft and pleasant to wear.”)

Suri Cruise, the six-year old daughter of Tome Cruise and Katie Holmes, has been spotted wearing red lipstick and clomping around the city streets in high heels since the age of three, proving the wealthiest of little girls are not immune to the hype.

In fact, the world’s most expensive brands want their slice of the tweenage pie too, with Gucci, Dior, Burberry and Versace now all producing a children’s range. Donatella Versace handpicked the 10-year-old daughter of supermodel Cindy Crawford, Kaia Gerber, to front the Young Versace campaign. Wearing make-up, with her hair volumised and windswept, and donning a leather jacket and miniskirt, Gerber appears at least four years older than her tender years in the shot by famed fashion photographers Mert Alas and Marcus Piggott.

There are still dolls, of course, but these dolls are light years away from sweet Strawberry Shortcake. Bratz dolls, for example, are smothered in heavy make-up and don everything from hair extensions and fur boleros to leopard print catsuits and pink vinyl boots. There’s
a Bratz Babyz range too, featuring toddlers wearing G-string nappies and chain belts.

Mother and author of Things My Daughter Needs To Know – a no-holds barred guide to life for girls – says Bratz dolls are banned with a capital B in her house. “Could someone please tell me why these dolls are dressed like cheap tranny hookers? I don’t need my daughter getting her sartorial tips from them,” she says.

Then there is the music. Madonna warbling about virgins being touched for the very first time drew gasps of horror in the 80’s, but now seems positively sedate. In 2010, R&B singer Rihanna, whose average fan is believed to be aged between 12 and 13, released a single called S&M. In the film clip, she writhes around in ropes on all fours, dons a pink dominatrix suit while whipping tied-up men and fellates a banana, all while crooning:
“I may be bad, but I’m perfectly good at it
Sex in the air, I don’t care, I love the smell of it
Sticks and stones may break my bones
But chains and whips excite me.”

Rihanna’s antics are a long way from Kylie bouncing around to the Locomotion in 1988 with her bad perm and ra-ra skirt. The tween market emerged as a money-spinner in the late 80s, and had grown so exponentially by 1998 that it caused Bruce Friend, vice-president of worldwide research and planning for Nickelodeon, to declare “The 12 – 14 – year-olds of yesterday are the 10 – 12 – year-olds of today.”

But 14 years on, just how “old” are 10 – 12-year old-girls now? Their generation is more target=marketed than any other. Their heroes are stars like Miley Cyrus, who, by 16, was performing a pole dance on stage wearing micro hotpants. They have been bombarded with more sexual commercial messages at a younger age than children of the 70s and 80s ever were; messages they simply don’t have the cognitive skills to effective process and understand.

Dannielle Miller, author of The Girl with the Butterfly Tattoo and director of Enlighten Education, which conducts worships to empower young girls, says that girls today receive a plethora of adult messages from all different directions. “And the problem is, it’s not just sex that sells today, it’s sexism as well,” she says. “Our culture tells girls that being hot and sexy and useless is way cool.”

Emma Rush, author of a 2006 report into the sexualisation of children in Australia, describes the industry as nothing short of “corporate paedophilia”. In a recent article for the Sydney Morning Herald, Dr Rush slammed fashion house Witchery for the “sexed up” advertising of its new tween line, 8Fourteen, saying “The implication that 8-year-olds are simply physically miniature versions of 14-year-olds, and that 14-year-olds are simply physically miniature version of 18-year-olds, is garbage. They’re all at quite different developmental stages. Putting the older ones up as ‘style models’ for the younger ones in not appropriate.”

It’s not only inappropriate, it’s also dangerous. Research points to early sexualisation as a contribution to body and self-image issues, anxiety, depression and eating disorders. “Girls and teenagers who have high exposure to mass media that sexually objectifies girls and women are more likely to view themselves as sexual objects,” says Jennie Hannan, executive general manager of Anglicare.

“These messages promote unrealistic expectations of what it is to be a woman or a man. They promote sexuality to the exclusion of other characteristics that are important for  growing into a healthy, happy adult, such as a healthy, active mind and body.
They also promote physical characteristics as of primary importance in the development of your sense of self, neglecting the idea that physical and emotional development need to go hand in hand.”

The Australian Psychological Society was so concerned about the effects of this snowballing sexualisation on children that, four years ago, it drew up a guide for parents to help their daughters navigate and emerge from the onslaught with a healthy self-image.

In her role as Commissioner for Children and Young People in WA, Michelle Scott has put the topic high on her agenda, saying it is a major concern of parents and child health professionals around the State. “Children as young as seven experience body image dissatisfaction and 30 percent of Australia’s 11 to 24-year-olds have a body-image problem. Potential harms caused by sexualised media and advertising on children should not be ignore,” she says.

So what’s being done about it? For many parents, the raunch culture is so saturated and seemingly impossible to regulate that i can seem an insurmountable mountain to climb. “Short of  becoming a police state, I don’t know that there is a simple solution here,” Yasa admits.  “The only thing I could suggest is to introduce some regulations when it comes to age-compression marketing. Do we really need high-heeled booties for babies and pole-dancing kits for four year olds? We could easily ban these products and be far better off in the long run.”

This upsets me so much. I am well aware of the agenda behind this and I find it disgusting. As a parent, I don’t allow my children to watch Disney (see my post about Disney), I don’t listen to mainstream music, so therefore my children only have limited exposure when they are at school or somewhere else, I buy them age appropriate clothes and I don’t allow any music channels on tv either (it’s mainly just children’s shows I allow).
I just hope that people who read this can understand what’s going on and stop buying these products.
Hit them where it hurts buy refusing to buy their products. They’ll soon get the message if people, en masse, stop buying their goods.
We need to make a stand and show them we mean business.
p.s. Don’t get me started on those ridiculous children’s pageants either. lol 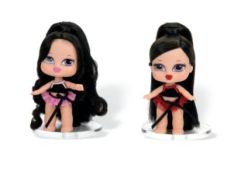 4 thoughts on “Hard Sell. An excerpt from a newspaper article on the sexualisation of young girls.”